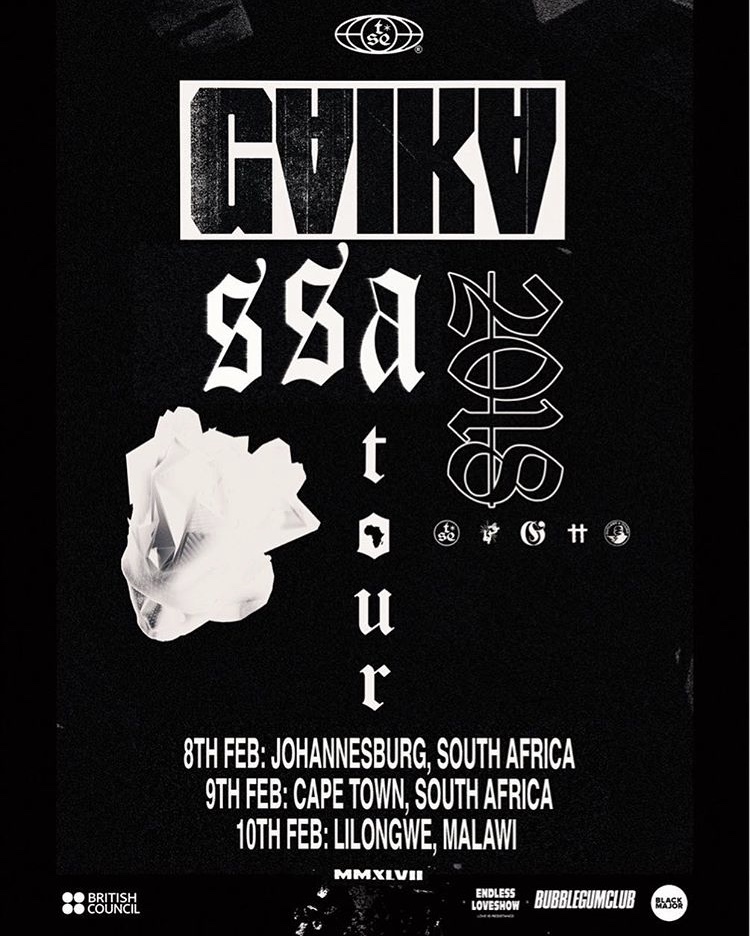 He’s been called electronic music’s answer to Jean-Michel Basquiat and is named for a famous Xhosa Paramount Chief – and now the UK’s Gaika is set to make his South Africa and Malawi debut with a trio of mind-blowing live shows.

The London-based vocalist, producer, visual artist, filmmaker, songwriter and performer is being brought to Southern Africa through a collaborative effort on the part of British Council Connect ZA, UK-based Endless Love and Black Major, with media partner Bubblegum Club.

Gaika will perform in Johannesburg on February 8th, Cape Town on February 9th and Lilongwe on February 10th – and the artist describes his upcoming SA and Malawi tour as an “emotional” experience.

“I am looking forward to coming back to South Africa in 2018,” says Gaika. “Its’ very emotional for me to come back to the place my name is from. I spent some time here as a child. I am greatly inspired by its history and culture.”

Signed to Warp Records (Aphex Twin; Battles; Brian Eno) after gaining a devoted following as an independent artist, Gaika is a prolific producer of intensely creative material. Late 2017 saw Gaika unveil The Spectacular Empire Volumes I & II, following the release of 2016’s acclaimed SPAGHETTO EP. The Spectacular Empire presents Gaika’s vision of the future, marrying social evocations, politics and art in a thudding dancehall powerhouse. His recordings showcase a sound that has been described by Dazed as a warped, electronic blend of grime, dance hall, garage, hip hop and R&B. “I like the idea of putting these organic sounds into a weird, mechanical space,” he said in an interview with the UK digital publication.

“Like Gaika himself, everyone involved in this project is intensely forward-looking, and I know the shows are going to be talked about as a live music highlight of 2018,” says Black Major’s Sevi Spanoudi.

“It feels so good to coming back to South Africa to tour GAIKA live,” comments Kazim of the Endless Love team. “Something that very few people know is that when Gaika and I first started working together and developing all the early creative, I was in fact living in Joburg and so the city heavily influenced my work at the time. It feels so exciting to be able to bring Gaika, the full live experience, to South Africa, whilst having time to make some collars!”

“We create opportunities for urban 18-35 year old artists, creatives and audiences through programmes focusing on storytelling, insight and connections,” states the British Council of its involvement in the tour. “We do this to build greater exposure for contemporary practice and culture between Southern Africa and the UK and for young people to tell their stories. Our key focus areas are on Insight/Opportunities/Communities within the arts in Southern Africa.

Gaika’s shows are being presented in conjunction with Subterranean Wavelengths Label at KCB (Kitcheners) in Johannesburg, Button Bashers & Uppercut at The Waiting Room in Cape Town and Grittah’s Camp in Lilongwe.

With The Guardian describing Gaika as “testing the confines of British black music with his high-concept image and futuristic beats”, these February shows are absolutely not-to-be-missed.